The religious community in Baltimore—and throughout Maryland—has an abiding faith in the capabilities of Lewis Contractors. Since 1966, we have been building churches, synagogues and faith-based community centers, including add-on projects, such as office renovations and day care facilities. We are able to represent the interests of the owner, clergy, staff and parishioners, while simultaneously helping the Building Committee prioritize and meet its needs. And we are used to working in high-stakes situations, such as for our restoration of the Baltimore Basilica of the Assumption, where the entire project had to be approved and the drawings blessed by Pope John Paul II.

Recent faith-based projects include restorations and renovations to St. Anne’s Episcopal Church, Second Presbyterian Church, the St. Mary’s Spiritual Center and Historic Site, St. Mary’s Historic Chapel, First and Franklin Street Presbyterian Church, Central Presbyterian Church, Lovely Lane Church and others—all of which are award-winning projects. Our ability to meet the needs of all stakeholders, without losing sight of the broader, “big picture” purpose of the project, has enabled us to become the faith-based community’s most trusted partner for construction projects large and small.

After completing the cathedral’s original restoration in 2009, Lewis Contractors was called upon to repair damages the Baltimore Basilica of the Assumption sustained during an earthquake. In August 2011, a 5.8-magnitude earthquake shook the Mid-Atlantic, causing more than 50 cracks and some structural damage to this historic cathedral in downtown Baltimore. Most of the damage occurred at the highest point of the Basilica.

The repair work included plaster demolition, masonry repairs, plaster repairs and painting of both on the interior and some components of the church’s exterior. The erection of the scaffolding to reach the high ceilings of the cathedral took 7 weeks to complete. Extensive decorative draping was utilized to conceal construction as all work was completed around weekend services and weddings.

Baltimore Basilica of the Assumption Restoration

This restoration of the Basilica of the Assumption required four years of preconstruction planning, including many prototypical installations. Phase I included an underground concrete vault housing public toilets, storage rooms, new mechanical spaces, and the excavation of the undercroft and underpinning of most of the building. This was performed while the building was still open for daily mass. Doing our best to dampen noise and vibration, Lewis excavated over 250 CY of earth for the addition of the adjacent underground addition. This necessitated underpinning both the cathedral and sextant’s lodge, next door, and provided headroom needed for mechanical rooms, a 40 seat chapel and general public access. Interior excavation had to be done with hand shovels and wheelbarrows due to access and the delicate nature of the building.

Phase II was the reframing of all roofing and reintroduction of 24 skylights into the dome; and the restoration of the building’s exterior. Phase III included the interior restoration and upgrading of all systems. The project duration was 30 months. The first nine months of construction had to be worked around a daily church occupancy. The project was surrounded by streets and alleys on four sides—three of which are major arteries that could not be blocked—staging space was at a premium, and parking was non-existent.

Work included a 40,000 SF addition and 6,000 SF renovation to the existing church complex, as well as site development, utilities, and a new parking lot. The sanctuary addition features a large worship and performance space with a seating capacity of 600. Full audio and theater-style lighting systems are operated from an open audio-visual control platform at the rear of the sanctuary.

All work was staged in the midst of a fully occupied church program with activities (including daycare) running every day of the week.

Church of the Nativity Addition & Renovation

Lewis Contractors served as construction manager for this 40,000 SF renovation/addition. The project included a 2-story Nave/Sanctuary/Narthex addition to the existing Roman Catholic Church.

This $13M renovation/addition was made necessary by the growing Nativity congregation. The new space includes a 40,000 SF, two-story Nave/Sanctuary/Narthex addition to the existing Church. The new sanctuary is approximately 30,000 SF with main and mezzanine levels with a maximum buildout occupancy of 1,450 people. The new narthex and café at the rear of the nave provide ample gathering space.

Church of the Resurrection Addition & Renovation 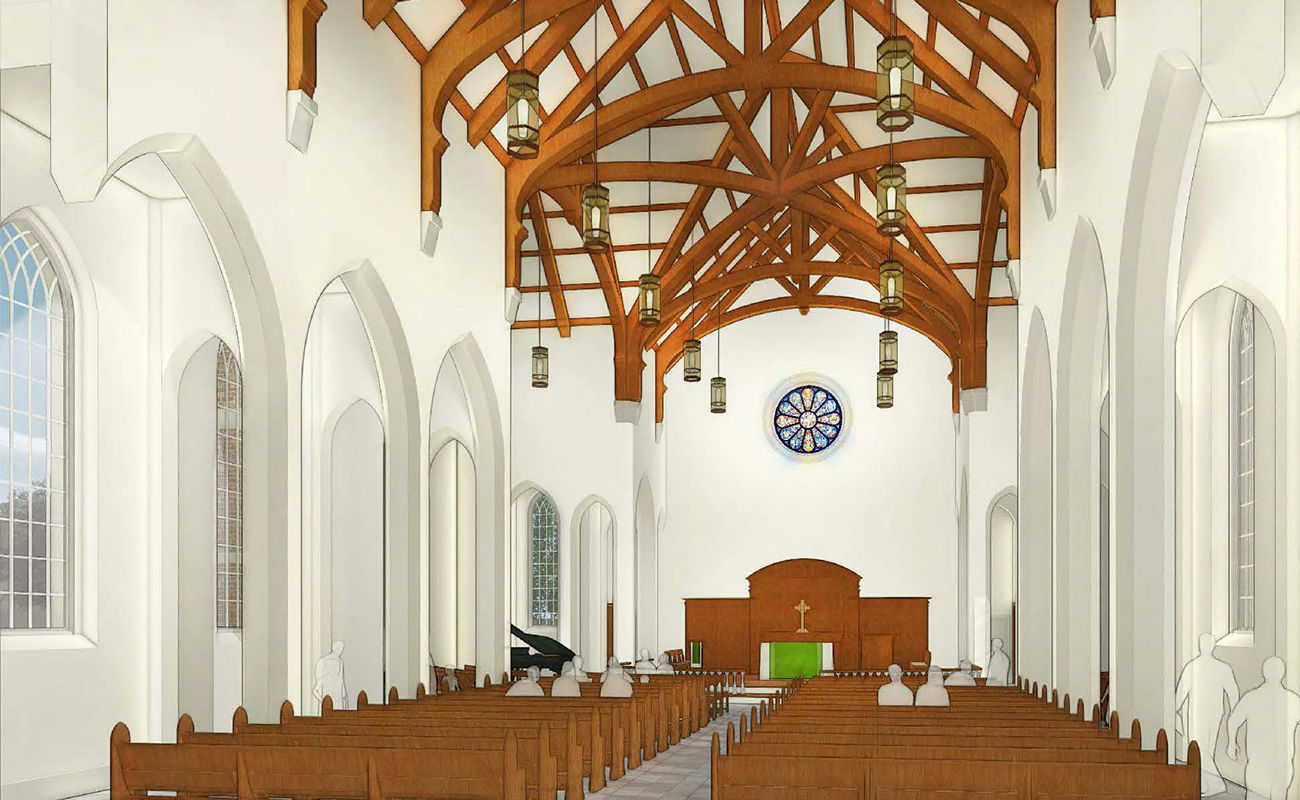 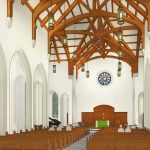 This new 9,000-square-foot sanctuary building is designed to host worship services of up to 350 attendees. The sanctuary will be of traditional Anglican architectural design featuring arched operable windows and wood trusses and will also feature a chapel just behind the chancel for small services or quiet reflection and a second floor choir loft.

This portion of work represents the first phase of the church’s planned building construction program which will ultimately convert the existing sanctuary into education and meeting space, create additional classrooms, offices, gathering and outdoor spaces within its campus.

The expansion will provide much needed space for the congregation while showcasing their campus along Greenspring Avenue.

Construction of the new sanctuary is slated to begin in Spring 2018.

This project is a historical restoration of the landmark First & Franklin Street Presbyterian Church in Baltimore. Work included extensive roof repairs requiring the modification of the existing drainage system. The project involved a large historical interior paint and plaster restoration as well as the exterior re-pointing of existing masonry. Lewis Contractors added air-conditioning and duct work to the attic above and behind the vaulted sanctuary space, expanded the sanctuary platform, installed modern lighting and completed minor restorations to existing pews. First and Franklin Street Presbyterian Church is listed on the National Register of Historic Places.

This CM contract involved the restoration of the 1887 sanctuary and plaster dome. All finishes were restored, and new electrical systems and lighting were introduced. The original mural depicted the night sky star pattern of November 6, 1887 at 3:00am for the dedication of the Methodist Church.

Painted over in the 1930’s, a canvas covering was attached to the plaster dome and a star mural pattern was painted on the canvas. With the canvas removed, locations of stars were transferred to the floor of the scaffold platform, compared to astrological charts, and the first rendering of the mural was prepared by Thomas Moore Studios. The extensive plaster cracking was repaired and decorative painting of the dome was restored.

The renovations included demolition of the existing finishes and the construction of a new coffered acoustic tile ceiling and porcelain tile floor throughout the space. Additional work included new recessed lighting, the refurbishing of existing pendant lamps, paint, and custom wood trim to be installed around existing artwork throughout the sanctuary. Perhaps the most notable element of the project was the church pews which had to be carefully removed and transported to a professional refinisher in New York state. Once there, the pews—and their accompanying kneelers—were chemically stripped of their existing varnish, cleaned, refinished and finally returned and reinstalled in their newly renovated space.

The renovations to St. Issac Jogues Church included work in both the nave and the church lobby areas. In the main lobby Lewis provided new floors, drywall and fresh paint. Work in the nave involved a comprehensive interior renovation. Lewis abated the VAT asbestos containing floor tiles, removed the existing ceilings and reframed the stairs leading to the altar.

Work included the installation of new ceiling and lighting systems, new flooring, and the construction of a new choir platform. The existing pews were removed and stored onsite to protect them during construction—they were reinstalled at the completion of the project. All work was performed amid an occupied religious facility with ongoing programming throughout construction.

This Design/Build project took place on a religious campus/historic site with an active touring schedule. Work required advance coordination with the Owner to protect visitors and employees from construction nuisances such as dust, noise, vibration and other construction hazards while touring areas undergoing restoration. In addition, at over 200 years old, the aging chapel required extensive abatement of hazardous materials. Lewis worked successfully to overcome several unforeseen conditions without detriment to the budget or schedule. Paint and plaster restoration work was completed to match the existing material and colors, and invasive exploratory work was accomplished without delay to the project schedule. Work also included extensive carpentry, marble and tile work throughout.

The project involved sitework and an addition at the St. Mary’s Spiritual Center complex on North Paca Street, in Baltimore. The 3,500 SF addition serves as a Visitor Center for the site, which is home to two historic buildings, the Mother Seton House and the Historic Seminary Chapel. An old freestanding stone wall on the site was re-incorporated into the project. The adjacent structures onsite remained open during construction, necessitating careful site coordination for staging, deliveries, and construction nuisance issues.